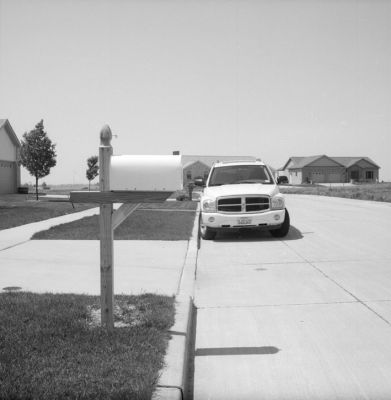 The solo exhibition ‚At home in Sweden, Germany and America‘ by Gerry Johansson at Spazio Labo in Bologna opens on May 11, 2020.

At home in Sweden, Germany, and America by Gerry Johansson opens on March 11, 2020, at Spazio Labo in Bologna and is a collaboration between Spazio Labo and OMNE – North East Mobile Observatory of Castelfranco Veneto.

The solo exhibition is a retrospective of the famous trilogy of books America (1998), Sverige (2005), and Deutschland (2012) which collect photographs taken by Johansson during various trips made between 1993 and 2018 in Sweden, Germany, and America.

Over twenty years of photographic campaigns on the American, Swedish, and German landscape: urban and agricultural landscapes, cities and small urban centers, little human presence but many traces of man. A look at the man-made landscape that recalls that of the historic group of New topographics – from Lewis Baltz to the Becher spouses to limit the citations to the most well-known names – to which Johansson was certainly inspired at the beginning of his career but from which he subsequently moved to build a look of its own, apparently detached but in which the attentive eye finds a certain intimacy and a recurrence of themes and symbols typical of the Swedish author.