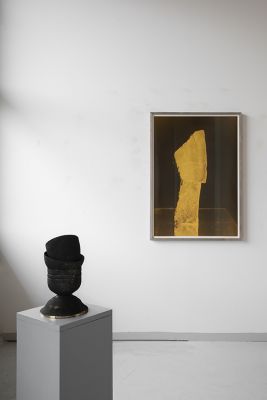 The theme of the series approaches the essential traits of decay, metamorphosis, and of the return to form – where there was meaning, the photographic image has rendered the subject neutral with the opportunity to begin a second life.
The process aims to transform images and objects – relics from nature as well as from society – into ‚fertile soil‘ for emerging images and meanings. In the process, the photographic image as such begins to disintegrate, as the signifier is separated from the signified object, and its original context.  Juxtaposing objects, the distinction between artifact and nature, the documentation, and the arranged dissolves with the intention to approach the Anthropocene and the idea that the burning of fossil fuels has pushed us into a new geological era. In this age of humankind, traces of human activities are present in the layers of the earth, in the oceans, and in the atmosphere.