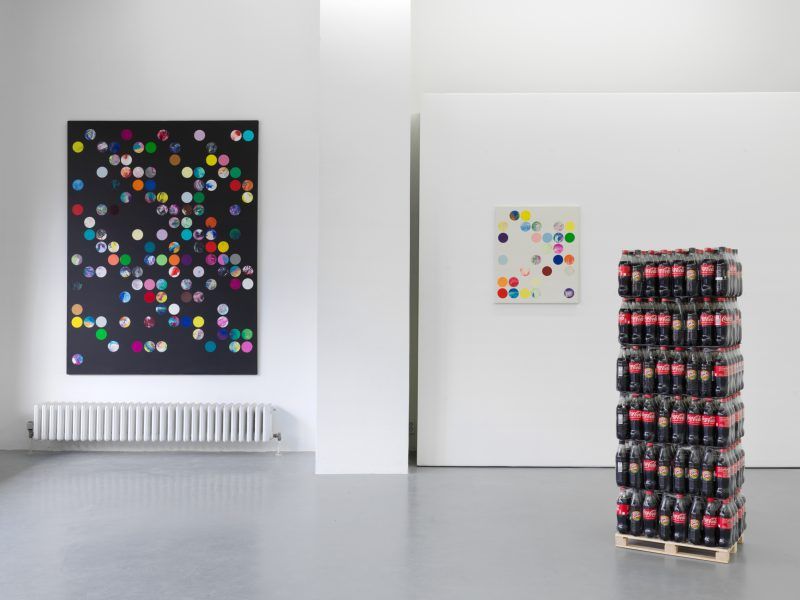 For her first solo exhibition “In Tongues” at Dorothée Nilsson Gallery Linda Havenstein created a series of paintings and sculptures which further explore her interest in language, codification, and the post-digital.
inquire

Her paintings hint at the figurative, circles dispersed over the canvas, small explosions of colors bring associations of zoomed-in screens, too pixelated to recognize the original image. One might try and find symbolism or meaning in the chosen placement or use of color. The titles offer a hint at what Havenstein tries to communicate but the message might not be clear. ‘Mixed Signals’, hot and cold, from zero to one.

The sculptures appear to be an examination of material culture of the 20th century. Coca-Cola and Vita Cola bottles are stacked on a pallet, elsewhere Coke and Pepsi are placed next to each other, complimenting colors, competing brands. „A Lamp’s song“, the office lamp of GDR’s Secretary for the Economy, Günter Mittag, blinks in morse code, singing a song about its desire to forget. The works presented both have a hidden layer which is only revealed with the help of Kassandra. This app gives the viewer a second reading and allows the works to be deciphered from a binary point of view. A computer language that is used daily is exposed, written down in a new manner, and allows the viewer to explore its material qualities. Zeroes and ones become blank spaces and vibrant circles or bottles of soda.

Havenstein renders the digital in an analog manner by applying paint to canvas and reorganizing everyday materials. The images Kassandra helps the viewer to see are thick, dripping, marbled, and cracked. 3D poetry on a flat screen. This additional layer, or unveiling, turns the binary back into an alphabet. The signals are mixed, the order is reversed.

Havensteins upbringing in Eastern Germany influences her work, she looks at her background and the stories that she was told then and after the fall of the wall and lets them infiltrate her work directly and indirectly. A silent song can be seen in the space, it is an office lamp belting its heart out. On off on on off. It tells of things it has enlightened in the office of the former GDR’s Secretary of Economy’s office. The bottles of Vita-Cola hint at an alternative history, one that is not told in the history books so often.

Havenstein tells intricately folded stories, she explores language,  what the writer is trying to say, and how they are saying it through morse or binary code, or in metaphors about flocks of birds. She explores mediums and creates systems, codifying the message.

Linda Havenstein (*1984, Germany) is currently based in Berlin. She studied Japanology and Journalism at the Universität Leipzig. Her work has been exhibited in Aomori Contemporary Art Center, JP; How Art Museum, CH; Bangkok Biennale, TH; New York Hall of Science, US; and in Kunstraum Bethanien, DE. She was a finalist for the Lumen Prize and was selected Changdong Fellow at the National Museum of Modern and Contemporary Art Korea. In 2020 she participated in the residency program of the Seoul Museum of Art, KR. ‘In Tongues’ is her first solo exhibition with Dorothée Nilsson Gallery.