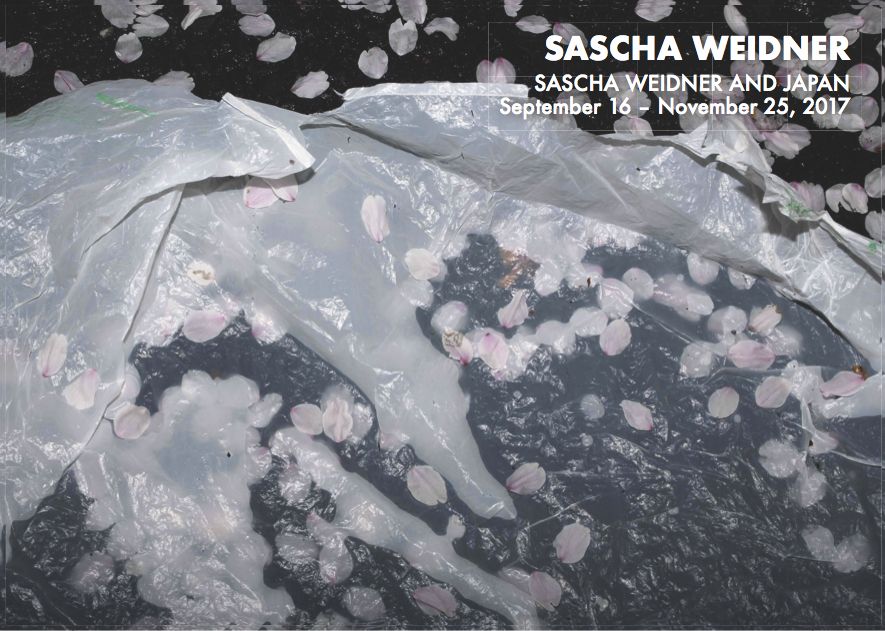 It entices the flowers– the storm–but though the garden’s white, it is not snow, and what it is that’s scattering are, in fact, the years of my life!
inquire

by Nyudo Saki no Daijo Daijin, in Hyakunin Isshu

(translation from Joshua S. Mostow, Pictures of the Heart: The Hyakunin Isshu in word and image, University of Hawaii Press, 1996, p.424)

The exhibition “Sasha Weidner and Japan” presents a selection of photographs from the “Hanami” series, which were taken by Sasha Weidner during his residency at Villa Kamogawa, Kyoto, Japan in 2013.

The resulting images of the „Hanami“-series share the photographer’s personal view of the cherry blossom season in Japan. The cherry blossom is often associated with the commencement of spring, the act of departure and a new beginning, but also with the ephemerality of nature’s phenomena. In his motifs, Sasha Weidner captures the windblown blossoms or the trees filled with flowers of gleaming white, varying from delicate to vibrant shades of pink, emphasizing their effect through dark, light-swallowing backgrounds.

The fascination with and the beauty of the annual blossoming of cherry trees in Japan becomes clear in Weidner’s photographs. A certain melancholy and sadness can be extracted at the same time, which point towards the end of the cherry blossom and all life’s finitude. Events that shook Japan, such as the nuclear catastrophe in Fukushima, also make Weidners photographic motifs appear in dark lighting and allow for life and death, the display of splendour, and destruction to be confronted with one another.

Sascha Weidner’s photographs relate to the essential – the flowers, the trees and the petals of the cherry blossom, driven by the wind. Man and his environment, in the form of architecture, are only peripherally invoked in the beautifully composed, photographic recordings. Rather, he seems fascinated by the contrast between darkness and light (Blow II), the ubiquitous symbolism of the Japanese cherry blossom (The Estate of Artist Sascha Weidner, approved Print no. 2) and the intense colors despite the deepest night (Symbiosis II). It is difficult to forget the longing present in Weiner’s mystical, dreamy photographs.

Sascha Weidner’s photographs relate to the essential, the flowers, the trees and the standards of the cherry blossom, driven by the wind. The man and his environment, in the form of architecture, are involved in the well composed, photographic recordings limited. Rather the contrast between darkness and brightness (cf. Blow II) seem to him, the ubiquity of the Japanese symbol of cherry blossom (cf. The Estate of the Artist Sascha Weidner, approved print no. 2) and the powerful color despite the darkest night (cf. Symbiosis II). It is difficult to avoid Weidner’s mystical, dreamy and nostalgia-soaked photographs.

“I am driven, constantly searching, a romantically moved traveller…”This is how Sasha Weidner describes himself on his photographic journey of discovery around the world: Los Angeles, Berlin, Frankfurt, Peking or Kyoto. Weidner’s photographs and their respective titles and then created series call attention to biographical experiences. They can be seen as a metaphor for the highly subjective sensory experience of his surroundings. Sasha Weidner was born in 1974 in Georgsmarienhütte and died in Norden in 2015. He lived and worked in Belm and Berlin.

The exhibition was realized in cooperation with Conrads Gallery in Düsseldorf.