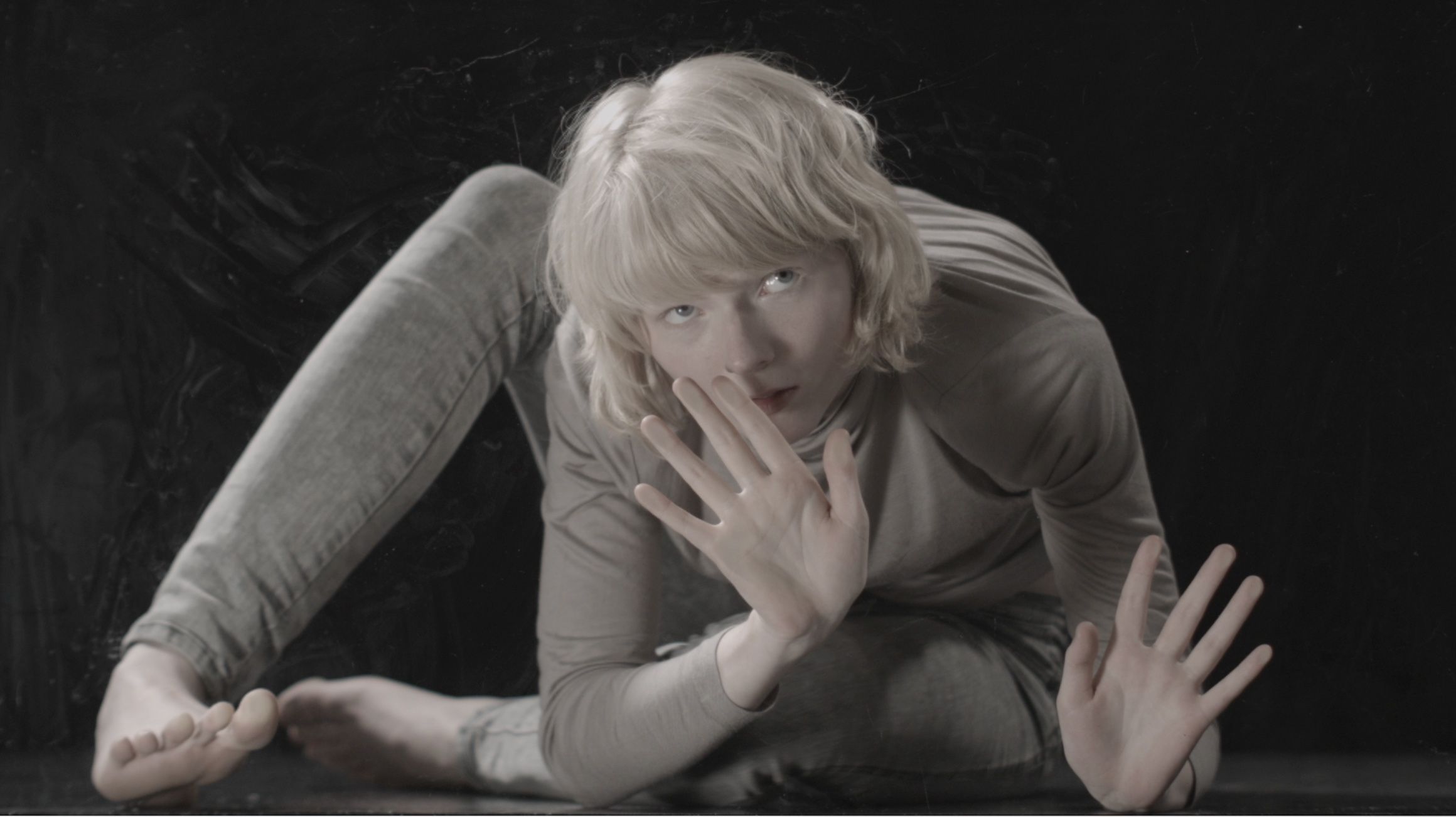 Spacious video installations and a live performance are presented in the exhibition FACES AND MOVEMENTS by visual artist Yvon Chabrowski at Dorothée Nilsson Gallery in Berlin.  For her current series of works, the artist Yvon Chabrowski (born in East Berlin) dealt with the functioning of three surveillance and recognition systems designed to recognize and evaluate faces, movements or feelings. In a setting consisting of video installations and a live performance, she makes various aspects of these systems visually and spatially experienceable and opens up a fragmented view of the relationship between the image/surveillance image and the body.
inquire

„Images and models created by surveillance systems write themselves into the body. How much freedom can you still live?”

FACIAL EMOTIONS ONE TO SIX AND A TO F (2018) is a two-channel video installation. The basis for the performance is the FACS – Facial Action Coding System, according to which common surveillance systems are supposed to recognize and classify six feelings (joy, sadness, fear, surprise, disgust, anger) on the basis of a person’s facial expression. FACIAL EMOTIONS shows two faces, on two monitors hanging freely in the room, performing different facial expressions. But can emotions be determined or even calculated? Can feelings be subjected to an algorithm?

DYNAMICS (2015/16) is a two-channel video installation. It “records the dynamics that unfold within a group in which every individual unconsciously responds to the movements of his or her neighbor: a swarm. The cameras’ frames delimit the boundaries of the performance space. Thus the recording medium itself influences the events taking place in front of the lens, bringing forth the happenings it records. […]The “view from above” is the perspective of the surveillance camera, meant to ensure the controllability of a situation, for instance at mass demonstrations. However, even with the help of this double perspective the actual events can hardly be reconstructed: Each camera image captures a slightly different dynamic, a different moment of escalation, a diverging narrative—although both videos show the very same moment, they by no means appear synchronous.” (Katharina Lee Chichester)

The video installation SCREEN (2017) shows a performer life-size in the space provided by a 40-inch monitor. ” Within an area of 92 x 55 cm, she touches, taps, and presses against the surface of the monitor from the inside. Her body bends and winds in the narrow space. The medial image-space is presented to the viewer as a real space. Although the screen demarcates the medium’s insuperable limit and stakes off the realm of the outside world, the image nevertheless has a profound impact on reality. The androgynous performer appears as a true bodily counterpart, whose gaze the beholder cannot evade. She is both reference person, and hence a normative dimension for the outside world, and creature of a purely medial sphere, herself caught in the technical constraints of the image-world.” (Katharina Lee Chichester)

CASSANDRA/MOVEMENT PATTERN (2018) is a Life Performance and will be performed on two separate dates in March. The performance deals with the monitoring system of the same name; CASSANDRA. The relationship between the body and the image or the images of the motion monitoring system can be experienced spatially.

Yvon Chabrowski studied photography at the Leipzig Academy of Visual Arts with Timm Rautert and Florian Ebner as well as free art at the École Nationale Supérieure des Beaux-Arts in Lyon. She completed the master class with Peter Piller. In her works, she deals with media-based pictorial formulas, which she separates from her context and thus both alienates and makes tangible in the first place. In this way, her sculptural video installations convey an awareness of the grammar and manipulation strategies of omnipresent media images. Her work has been shown in numerous international exhibitions, including the EIGEN & ART Lab in Berlin (2009 and 2014), the 4th Moscow Biennale for Young Art (2014), Kunstmuseum Liechtenstein (2016)5th Odessa Biennale “Turbulence” and “Between Post-truths and Events”, Frestas Trienal, São Paulo (2017). This year, she received the Aartists in Residence – a programme of the Federal Foreign Office in cooperation with the Landesverband Berliner Galerien (lvbg) – the regional association of Berlin galleries.