YVON CHABROWSKI | Situated Knowledges or the Attempt of an Encounter 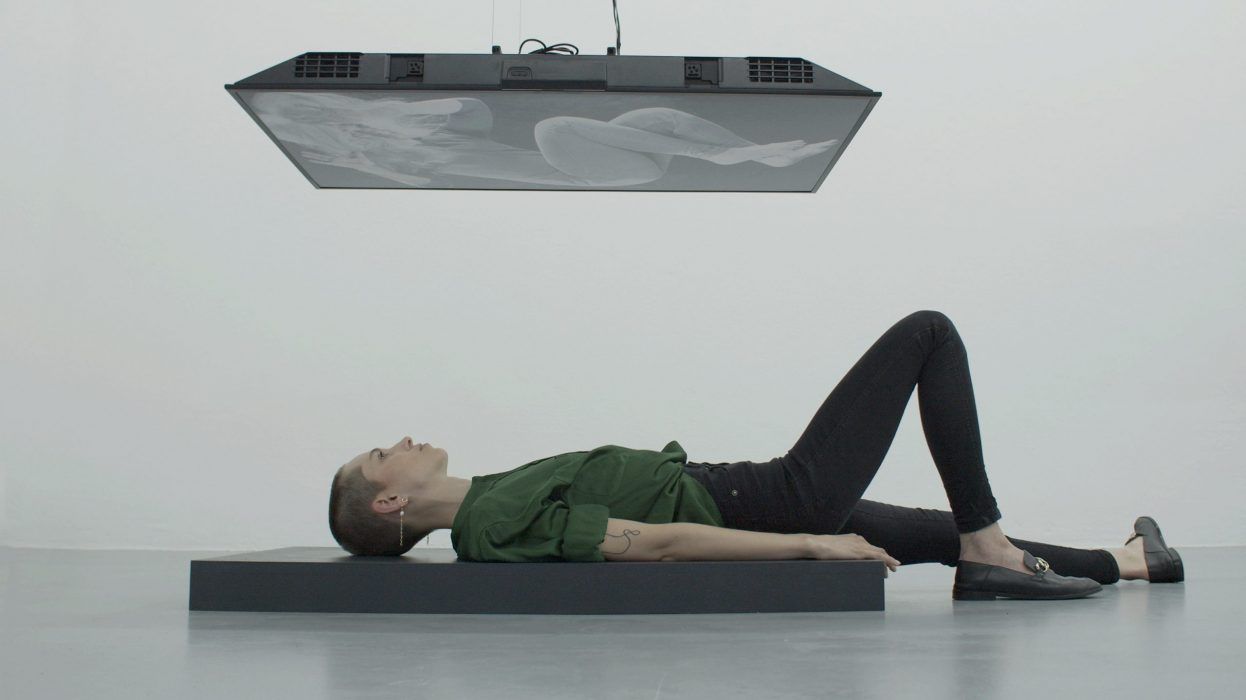 The exhibition Situated Knowledges or the Attempt of an Encounter presents the award-winning video sculptures LEVEL, HORIZONTAL, SWAYING and THE APPROPIATE BODY by Yvon Chabrowski.
inquire

The solo exhibition Situated Knowledges or the Attempt of an Encounter by Yvon Chabrowski presents the award-winning video sculptures LEVEL, HORIZONTAL, SWAYING and THE APPROPRIATE BODY, which make the borderline space of media formats spatially tangible. In the confrontation with contemporary media imagery, performative and documentary approaches are intertwined to create an open space of negotiation that invites the viewer to locate his or her own body in relation to the media surface and bodily representation.

Referring to Donna Haraway’s essay Situated Knowledges (1988), Yvon Chabrowski conceives a performative space of thought in which there is no neutral standpoint without one’s own body and ultimately one’s perspective. Haraway asks: How to see? Where to see from? What limits to vision? Whom to see with? Who gets to have more than one point of view? Who gets blinded? Who wears blinders? Who interprets the visual field? What other sensory powers do we wish to cultivate besides vision? (Situated Knowledges: The Science Question in Feminism and the Privilege of Partial Perspective, 587 p.)

In the video sculpture LEVEL, a performer steps onto a glass plate suspended at a 40° angle at a medium height in the room. Carefully she places her feet on the pane and raises her body, slightly insecure until she directs her gaze forward and reaches a stable position. In a
heroic posture, she now poises above the beholder. As a modern monument of victory, the screen shows an immaculate body whose vulnerability and fallibility are nevertheless always present. Lying on their back, beholders look up at a screen hanging horizontally in space, about a meter from the ground, just above their upper body. On the other side, a performer seems to be lying on the surface of the screen of the video sculpture HORIZONTAL, her legs pulled up, to fill the entire frame. In this way, the video sculpture not only creates visibility but also allows a physical experience of closeness, beauty, and comfort to be made concerning the aging female body, otherwise marginalized in the visual economy of the present. A performer hangs upside down, swaying back and forth with her strength and filling out the screen of the video sculpture SWAYING with her upper body. At times she seems to touch the surface of the screen from the inside, feeling it with her hands, and testing its presence. Then she strikes against it with her face. As she does so the monitor itself is swaying back and forth, as if she was moving it herself, or being moved by it. The video sculpture explores the interface between image and viewer space, and thus the question of how media images become reality.

Yvon Chabrowski (based in Berlin and Leipzig) investigates the life of circulating media
images in relation to our bodies and transforms them into expansive video sculptures. She studied photography at the Leipzig Academy of Visual Arts with Timm Rautert and Florian Ebner and fine arts at the École nationale supérieur des beaux-arts de Lyon. She completed the master class with Peter Piller. Her work has been shown in numerous international exhibitions, including the 4th Moscow Biennale for Young Art (2014), the 5th Odessa Biennale (2017), Kunstmuseum Liechtenstein (2016), and the Nederlands Fotomuseum in Rotterdam (2011). Chabrowski is a recipient of the 7th International Marianne Brandt Prize (2020) and the Villa Serpentara Fellowship of the Junge Akademie der Künste Berlin (2020). In 2019, Chabrowski published the book Video as Sculpture (Spector Books). Her current project BRAVE NEW BODIES (2021) is supported by the working scholarship of the Stiftung Kunstfond.

The exhibition was kindly supported by NEUSTART KULTUR Stiftung Kunstfonds